In a recent conversation on google+, Jason Pitre asked how many non-player factions we thought should be present in an RPG campaign.  There were several different suggestions that included small numbers (say, 4) and larger numbers (0-4 to start, then at least one per dungeon or adventure after that).  My …

N. Wright explores (‘throws out’) the idea of a magic system based on the elements and the seven chakras.  He initially decides that he likely won’t pursue this avenue, but I think it has a lot of potential.  Perhaps not in the way he initially described, but I can see a few ways to make it viable.

Ways to use Elemental Chakras

The described approach is to have each chakra bound to an element (and each element may be bound to more than one).  The number of chakras bound to each element determines the maximum tier of magic of that element that may be used.  The example provided is that someone with two fire chakras and one air chakra you could cast up to ‘second tier fire spells’, ‘first tier air spells’, and ‘third tier fire+air spells’.

I agree that this might not work as desired, if only because it is likely to devolve into a specialization choice (all fire, all air, etc.) or determining which bits you are slightly better at.

This topic was started in rec.games.frp.dnd on May 24, 2007. The original thread can be read at http://groups.google.com/group/rec.games.frp.dnd/browse_thread/thread/6662e4aded1800d3/6c3ab66bcdcb182e http://www.gameskb.com/Uwe/Forum.aspx/games-dnd/9960/kjd-gaz-celtic-type-setting Here are some initial thoughts on a Celtic-type region in my campaign.  I haven’t worked out much by way of names and the like yet; here I’m sketching out what game …

I see here a fair number of regular sites, lots of links, and lots of topics. Also, a handful of sites I haven’t previously linked, and a few YouTube videos I didn’t feel the need to post immediately but felt worth mentioning. Topic: Pathfinder MMO Big new this week, and …

Another eclectic list this week, and I have to admit it was a fair bit of time this weekend on it.  I was too busy through the week to really read anything, so I basically did all my reading on Sunday. Thankfully, the next month or so should be quite …

Part of the reason I created this site was to build a repository of posts I’ve made to rec.games.frp.dnd. It didn’t take long before this was my primary publishing location, and I just published links in RGFD.  I’m entirely okay with that, but my original goal kind of fell to …

I… I think I love this kid.

Just got my latest Loot! shipment.  The “Ultimate Hero System Bundle“, consisting of the following books (descriptions from the Loot! page): #1 The Ultimate Base: Whether it’s a castle, a gadget-filled secret headquarters, a starbase in deep space, or something even more unusual, a Base provides both resources for the …

Okay, I’ve learned something today: I hate one or more of hacking PHP hacking WordPress hacking this theme Since I’m more or less satisfied with WordPress and can accept PHP, I’ll have to guess it’s this theme.  If I’m going to revise the appearance of this site and integrate link … 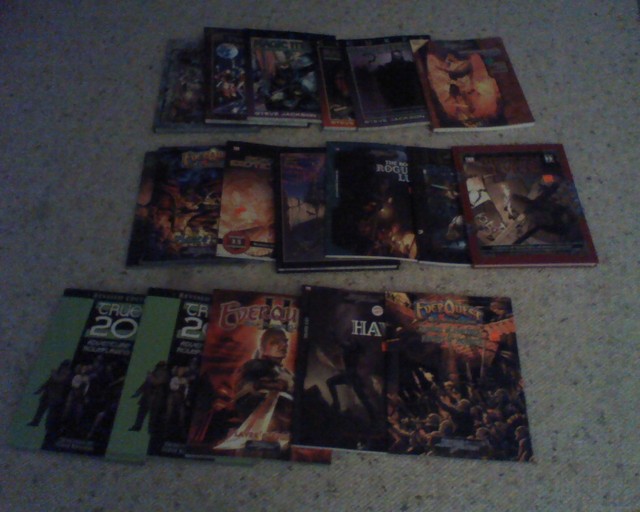 I was downtown on Thursday and dropped into that branch of my FLGS (I usually go to the one out of town — easier parking, on my way, and that’s where my pull box is). It appears they need some more room on their shelves, so they had a bunch …