A Hall of Fame entry, a few blog posts, a few Kickstarters, some exciting medical science, and a commercial for something very shiny I couldn’t make proper use of even if I could afford it.

Tales of the Grotesque and Dungeonesque: Random Wizard’s Tower Generator

Jack Shear has perhaps the longest blog title and hostname in all of OSR. He also has lots of really good ideas for the Weird. Today I learned of his Random Wizard’s Tower Generator, and I like it. A set of tables to generate general information about wizard’s towers, plus a few supplementary tables to round things out.

I love random tables that can give me direction, or jerk me out of a rut.  Let’s see what this one gives.

d12 twice, d20 once: The Cyclopean Tower of Zerio

d12: Really into Things Man Was Not Meant To Know

d10: Skeletons wander the area near the tower

d10: Overall aesthetic is rustic and charming [really?  I thought about overruling, but let’s go with it]

Secondary Protection: Hauntings (see What Type of Haunting is Afoot Table on page 74 [of Tales of the Grotesque and Dungeonesque Compendium — also available for purchase in hardcover or softcover, see James’ site for details).

I can work with this.  It gives me a good start and I can branch out to other sources and random references as I want. Added to the Hall of Fame under Setting Elements.

Will talks about The Vancian Wizard, Doomed Science-Hero.  This strikes me as an interesting thesis, that Vancian spell casting does not model magic precisely, but grossly under-understood science, that ‘spells’ are no more and no less than small bits of repeatable reality bending.  Casters do not necessarily understand how their spells work, but have worked out enough to get reasonably repeatable results for some things.  This even explains why there are so few spells known, despite the number of wizards who have existed over time and tried to figure out new applications of magic.

Between Are the Doors

Fictivite built on Jack’s Random Wizard’s Tower Generator and made some good changes to Generating Wizard Towers.  Specifically, I see:

I like the idea of having each area having an unusual feature.  I have any number of random tables that can be used for ‘weird stuff in this room’ kinds of questions, and while it might be a bit much to have every area have something unusual, even having most areas have something unusual should be fine.

Thinking about areas of the tower rather than simple ‘floors’ makes it easier to have alternate structures.  For instance, I can easily imagine an area spanning one quarter of two or three floors (the north quarter of the tower might be dedicated to a particular pursuit or interest or function).

I have been meaning, for some time now, to write an article or series of articles on grimoires and alternate spell research rules and the like for a West Marches-style campaign.

I’m starting to think I should just wait for Brendan to finish his.  He writes about grimoires and books of magic, researching spells, just added an article on how to improve your odds when doing research, and even what might happen if things don’t go right.

Really, he’s doing a good job here, I might as well see what he ends up with before spending my (not-so-available) time on it.

Ah, so that’s where Erik was last night.  I forgot he told us he was going to run a game for another group on Friday.

That’s okay, he gave a session summary where he tells us it’s Not So Different A World.  While it wasn’t quite the same as we see in Wampus Country, the session does sound pretty consistent in style with what we get up to on Fridays.  The “Lessons Learned” section is worth reading just on its own.

It appears Erik is easily inspired.  He misread a comment I made about ‘allodial systems of inheritance and fealty’ (or something close to that) as ‘colloidal fealty’.

He then felt compelled to write about The Meebs of Djelu, an entirely Ooze-driven culture.  He describes the post as

I agree, posts like this (and Vulture-Men of Buzzard Gulch) are the reason I read the blog and play in the Friday night game.

Better Angels — A Hell of a Roleplaying Game by Greg Stolze

The premise of this game really interests me.

There are lots of superhero games.  This is not one of them.  In fact, it’s a game about villains, and the demons inside them.

A demon gave you superpowers and it demands EVIL.  Maybe a little over-the-top, thwartable villainy will keep it under control.

An RPG about… I can’t even call them ‘anti-heroes’.  Generally good people who accept the demons and their power, and try to keep the harm down by channelling it in ways that hopefully other, more obvious and blatant heroes, can stop.

Of course, there are also the real villains, the ones who actually welcome the power and what can be done with it.  This game is about the ones in the middle, who are forced to try to walk the balance between good and evil.  They want to avoid evil, but if they avoid too much the demon might go looking for a more amenable accomplice.

This looks like a really interesting project.  The premise suggests it might actually be a challenge to play well, too. 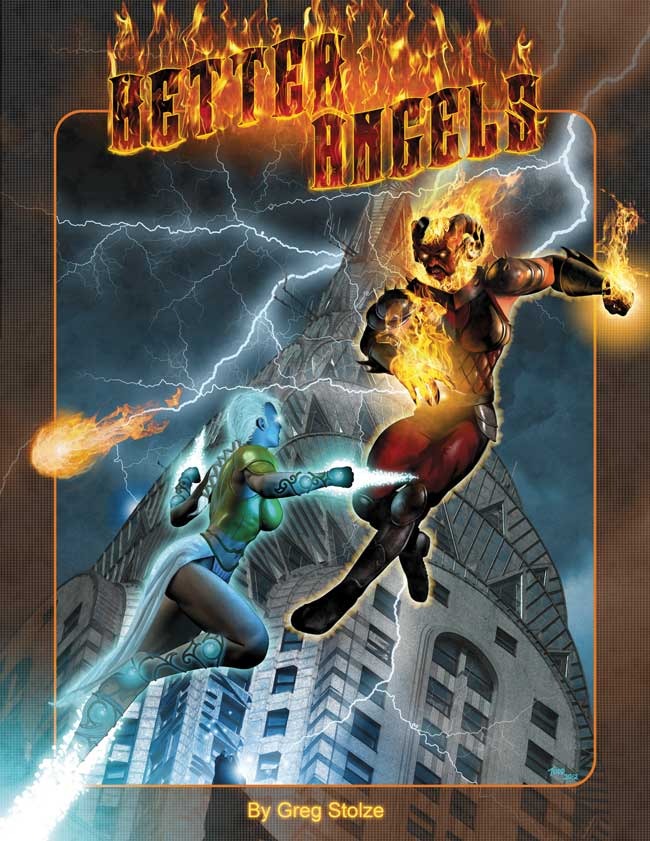 I mentioned this project in my last Links of the Week, and ended up backing this after all.  It just pushes too many of my buttons.

Japanese mythology, especially the creepy parts?  Take the spooky stuff seen in Usagi Yojimbo that scares even him, and turn that up?

I’m not entirely sure why, especially since I never really cared for Magic: The Gathering, but for some reason card-based wizard games really appeal to me.

This one’s a little different.  Rather than attacking each other (much), this is a tower defense game where you have to withstand attacks from hordes of monsters.  One of the stretch goals ($10,000, funding is currently at $8,217) is for a cooperative play mode.

The art looks good, I may back this one if it gets to some of the stretch goals.  At this point, though, I’m kind of stretched on other Kickstarters (I’ve got a few hundred dollars of projects still outstanding…).

To be honest, I don’t know much about this game beyond what’s on the Kickstarter project page.  However, wizard-related card games have gotten a fair bit of love from me, I think it’s reasonable that a martial arts card game can get a boost.

However small it is, coming from this site.

Collectable Card Game, not normally my thing (Magic: the Gathering kind of burned me out on the idea, and I don’t know that I’ve recovered), but this is preconstructed decks so you can play without having to do too much work building.  That’s good.  Expansions are non-randomized packs featuring all six factions, nice.  I never really liked random booster packs

Not entirely about fighting, but achieving global dominance via capture and control of Feng Shui sites?  Hmm… I’ve considered something similar for a Birthright-style campaign, though not in precisely those terms.

I think I’ll hold off on this one.  It looks interesting, the buy-in for what I want to see of it is more than I’m prepared for at the moment (I have to set some limits on what I back… this would probably pass if I wasn’t currently overextended), but I’ll probably take another look in a couple weeks.

Joel Runyon’s little story of An Unexpected Ass Kicking could, as a blog post, fit in the previous section, but if you read it you’ll realize pretty quickly why I put it here.

Wow, I can’t imagine what that must have felt like.

Apparently scientists have discovered a virus that kills all grades of breast cancer ‘within seven days’.  So far it has only been tested in the laboratory, and they have not found a way to create a therapy from it, but that it seems to exist may give a huge step in finding a way to defeat or prevent breast cancer… and possibly other cancers, if they can generalize from there.  Exciting stuff.

Normally things presented as videos get put into the Videos section below, but this is stunning.

She was born unable to move her arms… until science came along.

Even beyond what this means to her and her family, the technology this demonstrates and the possibilities inherent in it… I can’t describe.

It’s probably just as well I can’t draw well enough to justify having one of these devices.

Because if I could, I would be trying very, very hard to justify spending the money needed to buy one.  This is some gorgeous tech.