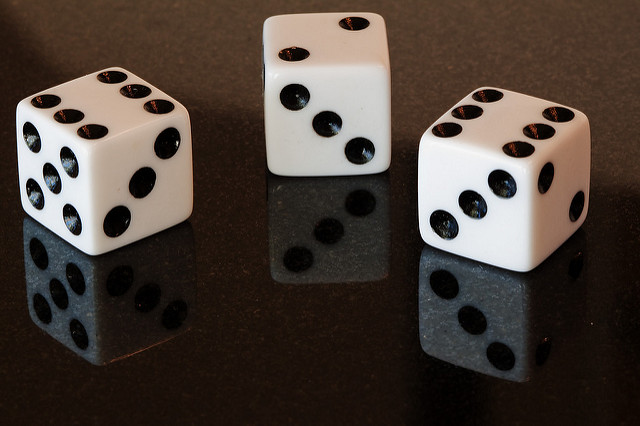 Justisaur posted an absolutely brilliant method of ability score generation to rec.games.frp.dnd. It’s simple, it provides some nicely organic scores, and it seems, as best I can tell, more fair than other random methods.

This is dead simple.

Arrange the scores to taste, add a +2 to a single score of your choice.

Any time a value outside 3..18 would come up (a low rolled value), simply reroll the dice. This shouldn’t come up too often, though (about 10% of the first roll, less than 3% of the second roll, less than 0.5% of the third roll).

So, simple to apply, good mean value, nicely organic values (no 18, 18, 12, 10, 8, 8, as is often seen with point buy, nor the ‘boring’ elite array), and absolutely fair (everyone has the same ability score total, avoiding big discrepancies that can happen with purely random values.

Point buy works much the same way, except that you pick the three ‘random’ values rather than roll them. I’d remove the +2 adjustment at the end, though, because of the greater control available. You can easily avoid all penalties if you want (at the cost of no 18 score), you can easily have multiple high scores (if you’re willing to take the penalties), and so on.

I also did an analysis using 3d6 and found that it gives a slightly better chance of ending up with at least one 17 or 18. I didn’t have time to include it here, and have not found time to do it over… but it’s how I use 27-25-23 today. I didn’t want to invalidate the analysis above so I have not changed the article beyond adding this note.