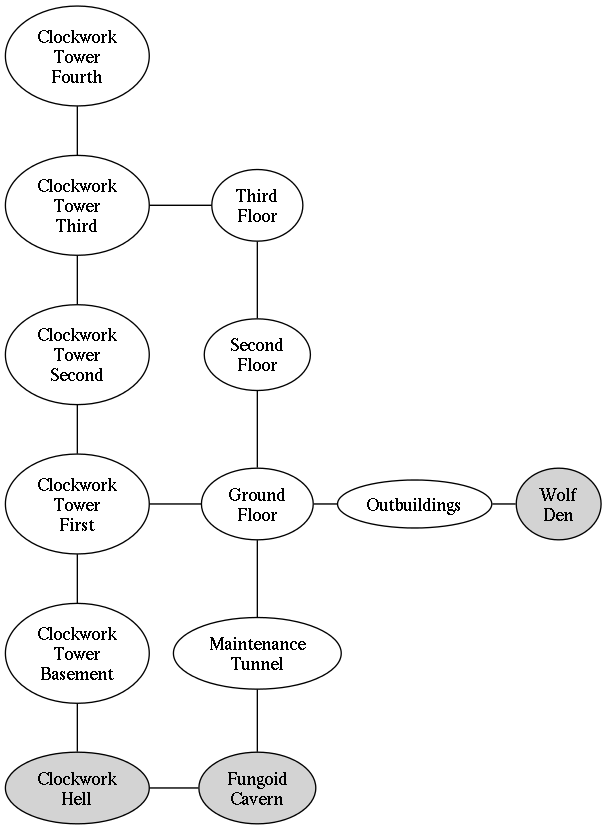 Greetings, readers-of-roleplayingtips! I see I’ve been mentioned again in one of Johnn’s notes, I’m happy to see you. I just thought I’d let you know that while this was the page linked, Node-Based Megadungeon provides a much better view of the megadungeon as a whole, along with links to all the regions, some theory posts, and even some play session reports. Oh, and a link to a ‘tourist map’ a friend drew of the place that does a wonderful job of conveying some feel of the location, without actually giving away any important detail — I love it.

I quite like Lionel Di Giacomo’s addition of ‘Transitions to the diagram and plan to write a longer response to it, exploring the idea a bit more.

Surface-level entry point to the megadungeon.

Various scavengers and other vermin.  Unstable and hazardous areas by nature of it being an abandoned building.  Some minor magical effects left over from when it was occupied, lingering environmental effects.

Most of the good stuff has been looted already, but it might be possible to find something worthwhile.  Entrance to the megadungeon.

Note that each of the nodes in the tower could themselves be broken down into multiple nodes, if there were reason.  In a larger tower I might do that, but because this one is relatively small (narrow, with few rooms) and mostly abandoned I would treat each node as an ‘area of interest’ and present as a piece.

A broken-down wizard’s tower at the top of a hill in the forest.  It used to stick out above the trees, now only a few levels remain, and only the first two are stable enough to hold even a single human’s weight.  It is not entirely certain what would happen if someone tried to climb higher, or if more than one person climbed to the second floor, but it’s pretty easy to guess.  Most of the outbuildings have been reduced to mere shells, if there is that much remaining.

The region is generally cooler than usual, and anything downstream for a mile or two tends to be somehow warped, but seemingly very robust.

Anything taken from the tower is likely to be ravaged by time, weathered by the elements, and/or touched with corrupted, failing magic.  Animals from nearby (including the wolves of the Wolf Den) tend to be changed somehow.

Top of a hill in the forest, surrounded by heavy vegetation that may be difficult to pass through.  [In practice I would place this somewhere specific in my campaign.]