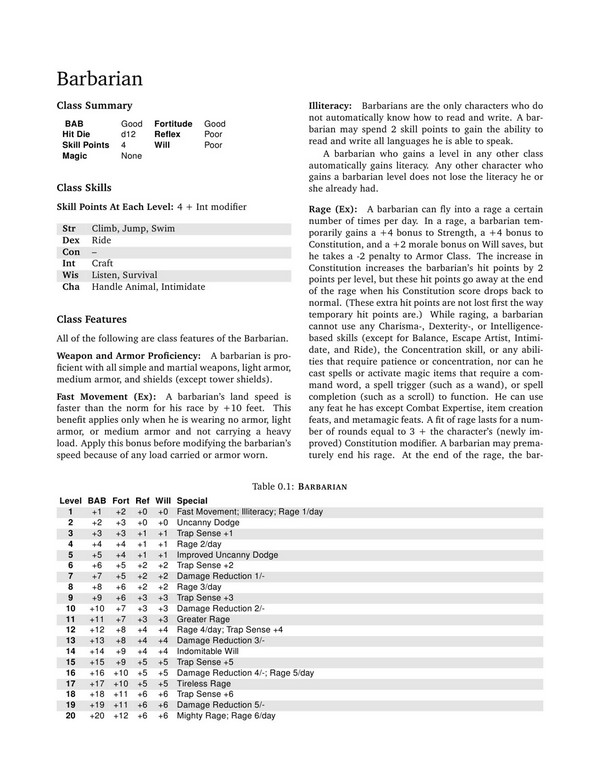 Greg Christopher does a fair bit of layout, and recently commented on google+

It feels weird for me to have an entire spread that I am working on with just text. I feel like there has to be a chart or an image to break up the spread in some way. Is that normal or should I try to get over it?

I think it depends on exactly what you’re laying out.  There are times where having text broken up helps, and times I think it doesn’t help so much.

For gaming purposes, since that’s specifically what he’s looking at, I am generally okay with significant wall of text.  It’s good to have some breaks, but they don’t need to be big, just enough to interrupt the wall.  I sometimes feel like ‘modern’ RPG documents often have too much interruption in the text.

I consider RPG books to often serve a purpose similar to technical books.  A wall of text, if that is what is needed, is fine.  Often it is not, because technical documentation often has a lot of headings, which I find to be sufficient separation.  I find tables and the like can also serve to sufficiently break up text, especially when it summarizes the material being described in the text.

Graphics… not so much.  Specific graphics are useful, such as in the D&D 3.x Player’s Handbook where the graphics illustrate cover rules (though this may suggest the cover rules should perhaps be simplified), but while general art can be evocative it might work better as chapter or section heads than space filler.

I’ve included a PDF I made years ago for a campaign I was playing in, so I didn’t need to bring the entire book with me.  It just has a few of the classes from the Revised System Resource Document.  There are some interruptions to the body text, where there are natural breaks in the text, but there are still a few walls of text (Bard class description especially).  There are a few places where there is room for a picture or something (bottom of the Barbarian and Monk class entries, and the variant Monk combat styles — pages 2, 10, and 12) but I am fairly satisfied with the empty space.  I think stuffing heavy art in those places could overfill the pages, while having art for some but not all of the classes might look inconsistent.