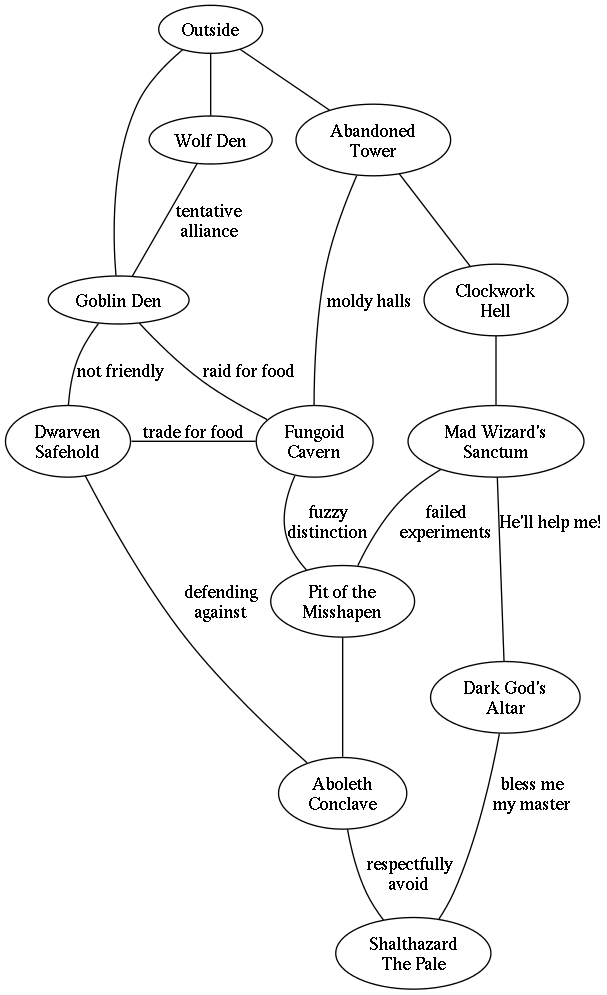 A better landing page for this series, including links to related materials on other blogs, can be found at KJD-IMC: Node-Based Megadungeon.

I have seen ‘megadungeon guidelines’ that suggest laying out the various levels and regions, then populating them.  This has some merit, but there’s a step that can be done before this that really helps: mapping out the contents of the megadungeon, the inhabitants and their relationships, before scribbling even the start of the map.

I took a few minutes this morning and came up with the following list of potential regions for a megadungeon (updated to provide links to the specific regions as they get developed):

Generally dangerous, with a couple places that could be relatively safe.  Note that the region names are pretty generic, for the purpose of conversation.  In practice I would name at least the Mad Wizard and the Dark God, and probably the dwarves of the Safehold, the Abandoned Tower, and probably the goblin tribe.  The information paths (or adventure hooks, if you prefer) would similarly be more specific.

I then identified relationships between the various elements and laid them out (GraphViz is a wonderful free tool for this), resulting in the map below.

There eleven distinct areas within the megadungeon (I don’t count ‘Outside’, it’s mostly an anchor for the diagram to show easy entrance points… but I’ll come back to that) with numerous links between them and notes about each link.

This makes it pretty easy to see how the various elements interact, and a bit of cleverness in laying it out even comes close to how it might look on the actual map.  I can build on this to develop each region, showing detail in a similar manner.  I would develop each of those graphs separately; there just isn’t room to do it here without cluttering things hopelessly.

It seems I’m mistaken.  When I finished outlining the megadungeon I ended up generating a graph of all nodes in the dungeon, breaking each region down into smaller areas.  Take a look at the graph here to see how it turned out.

This graph can still be built on, though.  As the various subgraphs (levels and regions) are developed, at a similar high-level view, further informational or “clue” relationships can be identified.  For instance, notice that the Fungoid Cavern is a travel hub — as long as you aren’t dangerous to them it’s a relatively neutral area you can pass through (no inherent animosity, and it connects to many things). If you talk with the dwarves, you are likely to find that they know quite a bit about what is going on in the dungeon.  In addition to their immediate neighbors, some among them might know about the following:

They might well know more than this, but it’s a start.  Similarly, the Misshapen might be able to tell of:

Clockwork Hell might have no one to actually talk to, so it may not have any such links.  Even so it is possible that there could be:

(I’m mildly annoyed; I know I have run GraphViz in a way that new edges don’t change node placement, they work around it, but I can’t find now how to do that.  Green lines added using Paint.Net.)

The green lines show the information paths described above.  I may or may not include them, or just the really key ones, because they tend to clutter things a bit.

Just as the individual nodes (levels and regions) above contain their own subnodes (not shown, but discussed above, the detail of each region) that point to the other nodes in this graph (and possibly their subnodes…), it is obvious that this map could be extended to have links to and from other maps outside the megadungeon.  I started to draw them, but again it complicates things.  However, I can easily see the following paths in and out of this map:

I’ve spent a couple hours on this this morning, mostly describing what I’m doing and why.  In practice, and with supporting information from my campaign (this is completely from a cold start) this could take somewhat less than an hour.  There is a fair bit more fleshing out to do, but I’ve got an outline I can easily look at and understand and use for further development.  When it comes to exploring this, I know enough about each region that I could easily prepare a region in an hour or two (using similar techniques) for use for a couple of sessions, at least, and that the PCs are likely to return to.  I hardly need to spend time on Shalthazard, for example, for quite a while, when the party is still dealing with the goblins.

This technique is just a specific application of my Campaign and Scenario Design techniques, and it fits in well with them.  It offers a way to quickly outline a megadungeon, with lots of material to use in outlining the specific regions, before delving into the actual detail used in play.  It provides an easy way to integrate other material.  For instance, ‘Clockwork Hell’ might be a particular module I’ve bought, and it’s now pretty easy to massage to fit, or I might pull out a generic “Dark God’s Altar” I’ve prepared before and reskin it (similarly with the Goblin Den and the Dwarven Safehold).

You have multiple paths through the dungeon (three ways in from the surface, plus lots of physical paths from there).  If you were hunting Shalthazard the Pale, you not only have lots of ways you could get there (non-linear dungeon, yay!), you can get enough information to make the decisions sensibly (player agency, yay!).

I can also, as described, expand on this to provide clues to things outside the megadungeon leading both in and out.  You might be looking for Shalthazard and discover the Dark God’s Altar, along with the prophecy, and drop those plans.  This is, in my mind, totally cool.  I might not have gotten around to developing Shalthazard beyond a name and general characteristics, so I haven’t lost a lot of time, and he may still be there when you return.  Or, because I know about him and you smashed his holy place, he might send his agents looking for you — any work I have done to this point isn’t wasted.

Finally, because of the non-linear relationship between the regions, and my knowing the relationships but not how they will be explored, I get to be surprised by how things turn out, and in a great way.