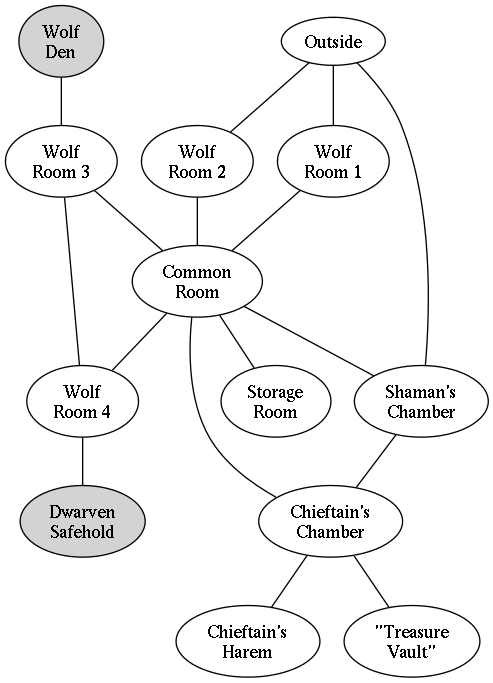 Desperate goblin clan looking for a way to escape their erstwhile ‘allies’.

Frightfully skinny, unhealthy-looking goblins, starving and desperate.  Their warren stinks a little less than most because they don’t have scraps of edible material lying around.  Surprisingly, their wills have not been crushed, but tempered — they fight on to improve their condition and situation (but would happily escape it) despite the crushing oppression.

Unusually worn, even for goblins, tools and equipment.  Anything they find that might be edible probably has at least one bite out of it (and possibly an accidentally-poisoned goblin nearby… that might have bites out of it).  They’re that hungry.

Shallow caves near the Abandoned Tower, (now) surrounded by the Wolf Den.

This is an unusual configuration.  The wolves have, in part, annexed part of what was the Goblin Warren, but I’ve left it this way in case the goblins can shake their Lupine Overlords.

Also, this is somewhat more detailed than most of the rest.  Most of the rest, each of these nodes could be broken down further, but in this case this is likely as far as I could go.