Swords & Wizardry is undoubtedly one of the Old School games, one of the many legs of the OSR.

I notice that there is no mention of education or training in Swords & Wizardry Core. There is a little bit about researching spells, and there are other methods of learning spells, but what about characters who aren’t Magic-users?

Let’s see if we can’t do something about that.

Before we can really start, I think it necessary to establish the working parameters.

First, I think we’ll completely ignore the training for advancement rules from AD&D. They are little more than an adventurer tax and not to my taste.

Second, I notice the classes and abilities available are pretty straightforward selections, and I want to keep that. These rules will have to be optional.

Third, anything gained through special training should be implemented in a way consistent with other rules.

I like making use of previous art. Whether or not I use it as originally written, it generally saves me a fair bit of work.

For what I want to do here, I see basically two primary resources available.

One is the Principalities of Glantri Known World Gazetteer. It has special magical traditions you can become trained in to gain special abilities… if you’re a magic-user. Other classes need not apply. I could probably extend the mechanisms to cover abilities for other classes, but that comes close to starting from scratch. Also, this is not Open Gaming Content, so I’d probably have to keep it to myself, or file the numbers off really hard. Between the two, I think it’s more work than I want to do tonight.

Each of the four books I mentioned has the idea of specialized training in an academy or with a traveling master. They are called different things in each book, but the rules for applying them (learning the lessons and advancing) are the same.

The books typically also include feats, prestige classes, and legendary classes (basically special prestige classes), plus things more specific to each book, but the specialized schools are of primary interest here.

Each specialized school consists of ten lessons, each of which has a minimum level requirement, an experience point cost and time cost to study, and typically some kind of fee (gold cost) to the instructor, and each gives an ability other characters don’t have. This looks like a pretty good fit.

When studying a magical tradition, a character must start with the first lesson and study them in order. Each has a minimum level requirement and experience point cost, and requires a certain amount of time to study as shown in the table below.

Obviously, some things will need to change for this to work in Swords & Wizardry.

This assumes a trainer is available. I think if a trainer is not available it could still be possible to learn things (someone had to originally, after all), but it should likely be harder. Making the time required for each lesson equal to a number of months equal to the lesson number is probably appropriate if one person could develop an entire tradition in his lifetime, but even if it were scaled to years it could be possible in a human lifespan. It might be just barely, but establishing a new tradition from first principles is a pretty difficult thing.

In this case it might even be reasonable to make the baseline measured in months rather than weeks. This could see someone go from untrained to full mastery in 55 months, a little less than five years.

I have no problem with someone choosing to take more than one school. The time requirements and experience point adjustments accumulate regardless of lesson number (that is, learning “lesson one” from three schools causes the same experience modifier as learning “lesson three” from a single school, though it can be done in half the time).

These are adapted pretty much directly from the books. I’m going to adapt mechanics somewhat. The names are pretty transparently modified from the original.

Many school abilities in the reference books give bonuses to skill checks. As Swords & Wizardry does not have skills, I’m going to rule that generally if a school ability would grant a bonus, here it will allow the student to make a check (if most characters couldn’t) or automatically succeed (if most characters could make a check). A check is generally a d20 roll, aiming to be equal to or less than an appropriate ability score (usually the ability score to use is obvious, but the Referee will decide).

A ‘blind check’ is one made by the Referee; the student does not learn the result until the consequences are known.

I would be inclined to also throw in a small quest, test, or something similar that demonstrates advancement along the path of knowledge. If you want to learn dragon magic, study of and interaction with dragons should be an important element of the training.

Despite the name, these are not the classic “burn it with fire” spell casters, but characters who delight in making things go boom! Originally presented in Path of Magic, but I see no real reason why only Magic-users could do this.

Bodyguards without peer. Originally presented in Path of the Sword, but while I don’t imagine many Magic-users would take this, I can see some Clerics doing so.

Harvest the plants, do useful things with them. Originally presented in Path of Faith, but again, I don’t think this needs to be restricted to Clerics.

I have been chosen to give away a PDF copy of Swords & Wizardry Complete. It was not identified how, so I’m going to make something up.

Create a specialized school such as the examples above. At a minimum, each must identify the ten lessons to be learned. Each may also identify an academy (institution where the specialized school can be learned), a traveling master (a person who may teach you the school, if you can persuade him), and/or certain events or conditions around the learning of the lessons. Related art, backing stories, and other extras are welcome as well.

Adaptations of existing schools (from the Legends & Lairs books mentioned above) are quite acceptable. Go ahead and improve the samples already shown, I was rushed.

Put the school in a comment below, or host it somewhere else and put a link in the comments below. Cut off is midnight Pacific Time between May 7 and May 8, and I’ll announce the winner by May 10.

The one I like best when I review them wins. The optional bits are not required, that’s what ‘optional’ means, but I’ll be honest, they can count in the judging. 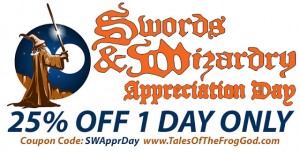 Swords & Wizardry Appreciation Day, “O” in the A-Z Challenge, and suitable for Seekers of Lore.