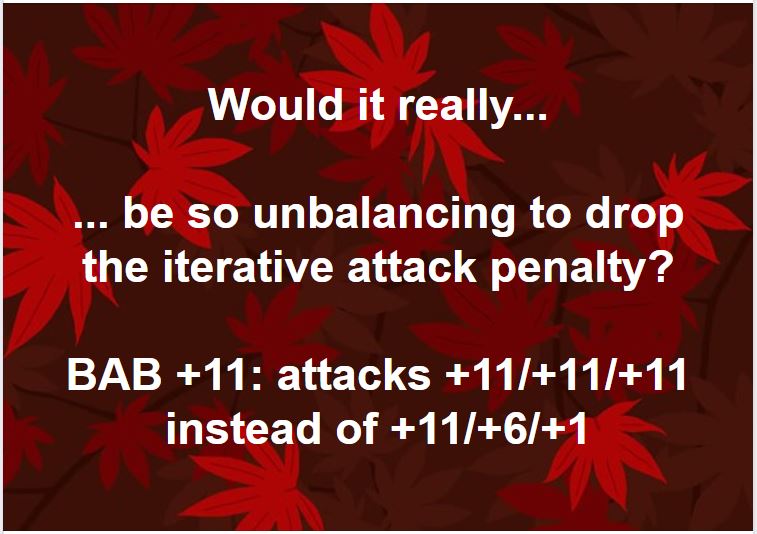 A few days ago I posted a surprisingly provocative question on Facebook.

I expected many of the reactions (most common response: “Yes”), there were suggestions I have no idea what I’m talking about (I’ll leave that for other to judge), and some interesting and actually insightful comments.

“Averaging Instead of Cumulative Penalties”

So instead of +11/+6/+1, average the attack bonuses and use the same for all attacks. An interesting idea, and lends itself to this simple pattern:

It could be -3/-5/-8, but I rounded in favor of the attacker because reducing that first attack bonus is a greater cost than improving the later ones is a gain.

I expect that it’s no real coincidence that this aligns well with flurry of blows and the Rapid Shot feat.

It does have the limitation that it removes the ability to decide after the first attack whether you’re going to make iterative attacks or do something else (like run away from the thing you failed to hit with your best attack bonus, despite 18 on the attack die)… but Vital Strike has that same limitation.

I’d be willing to use this in a ‘maintain the current balance’ replacement for the current rules.

This is an intriguing answer.

I think that at level 20, it almost certainly is not unbalancing. It changes some elements of balance, but overall it won’t do much.

At level 8, though, changing +8/+3 to +8/+8 can have a significant effect on combat. This is approximately where the power curves are changing.

I can’t say for certain that it’s unbalancing or not, but it’s worth further investigation.

In my experience, yes, they can be. There are some builds that get them more often, but I’ve also seen many fights where the high-damage combatant doesn’t even get there before the fight’s over.

I’m going to summarize the sorts of comments I feel worth response, and respond to them.

“The Math Works for a Reason”

In the sense that the math supports certain outcomes, certainly. I’m questioning those outcomes.

“You Must Be New Here”

I’ve been playing long enough I remember when multiple attacks did not take iterative attack penalties. You got fewer of them, sort of: a level 7 warrior in AD&D2e got ‘3/2’ attacks (one attack one round, two attacks the next, then one, two, one two). Given how infrequently a melee character gets to use iterative attacks (in my experience) I’d be willing to equate the extra +1/2 attack with a modern PC getting the potential of an additional iterative attack. The levels even line up, more or less (+1/2 at level 7, +1 at level 13)… close enough, especially when you get another +1/2 for specialization.

Not really. For initiative to really matter, the characters must be in a position to act and take advantage of going first. For the most part, this means “able to act at range”, unless the fight somehow starts at melee range. Which, okay, can happen in a dungeon, but in my experience fights usually start with at least some separation between the participants.

Which leaves ranged attacks: bows (since it’s hard to get iterative attacks with a crossbow due to reload time) and magic. Your archer will probably hit more often, but I’m not convinced it’ll catch up to the wizard who can drop a fireball on many enemies at once. with a saving throw that will likely be hard to beat (if it isn’t, you’re high enough level to use a better spell), and still does damage even on a successful save. Meanwhile, the melee brute is busy hustling across the field to get to his first opponent. We’ll wait until he gets for his his initiative to matter.

In short, inasmuch as rocket tag is a thing, your brute melee fighter, the one best able to take advantage of this change, still doesn’t particularly play that way.

Spell power is the last thing we need to increase. It might be worth increasing Armor Class, though, which could give us things that only the real professional combatants should be dealing with.

Ignoring, of course, that AC doesn’t apply to saving throws, and spells like targeting saving throws. See “last thing we need to increase”.

To Answer My Question

Removing the iterative attack penalties, without changing the number of attacks available, will affect balance. I do not think it would be a detrimental change.

It’s also not the change I would make… but ‘it would ruin game balance’ is not the reason why.